Cultural Arts Series Aims to Open Windows on the World The newly programmed “World Music and Festivals” series at the Ware Center of Millersville University brings the sounds, the moves, the flavors and the fun of cultures from around the world to Lancaster.

The “World Music and Festivals” series is part of the mission of Millersville University to create meaningful experiences and inspire the learning of different cultures from around the world.

In line with that mission, “we wanted to expand our programming and contribute to the cultural offerings in Lancaster in a unique way,” said Laura Kendall, director of arts at Millersville. “By presenting artists from around the world, we are connecting our mission to the city, our international faculty and students to the greater Lancaster area, and celebrating the music and the arts of various countries through these exceptional artists.”

Upcoming events of the World Music and Festival series—made possible through season support of Rodgers & Associates in Lancaster—will include:

Nov. 22, noon-midnight—Rose & Shamrock Celtic Festival. Back by popular demand, Lancaster’s second Celtic festival will again celebrate all things Irish in the Rose & Shamrock Celtic Festival. There’s so much going on, one venue won’t be enough, so the festival will take place at both the Ware Center and Tellus360 in downtown Lancaster, including music, dancing, food and workshops at both venues. Celebrations will go on from noon to midnight.

Jan. 28, 2015, 7:30 p.m. –Cristina Pato, Galician Bagpipe. Hailed by The Wall Street Journal as “one of the living masters of the gaita,” Christina Pato has the distinction of being the first female gaita (Galician bagpipe) player to release a solo album.  She has shared world stages with Yo-Yo Ma, Arturo O’Farril, Paquito D’Rivera, the Chicago Symphony Orchestra, and the Osvaldo Golijov World Orchestra, and now this celebrated musician will share her love of popular, jazz and classical Galician music with Lancaster. This performance is made possible by an ArtsConnect grant from the Mid Atlantic Arts Foundation.

March 6 & 7, 2015—Latino Arts Festival. Enjoy a weekend of Latino Heritage with a special Latino Jazz in the Sky performance followed by a full day of celebration with more Latin music, dance, food and art.

April 8, 2015, 7:30 p.m.—Fatoumata Diawara.  Singer-songwriter Fatoumata Diawara of the Republic of Mali in West Africa commands the stage with her energy, musicianship and choreography to present a modern African blend of rock and funk in a concert that suggests hope for her homeland, where recently erupted civil war has, in some places, led to a ban of music. This performance is made possible by the Mid Atlantic Arts Touring Foundation. 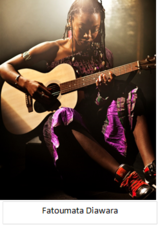 April 10, 2015, 7:30 p.m.—Charlie Zahm. With his baritone voice and mastery of guitar, Charlie Zahm is one of the most successful performers on the Celtic festival circuit. Weaving magical moments of Scottish and Irish history throughout his music, Zahm will perform with fiddler Tad Marks, guitarist Steve Hobson, and Champion Highland dancers Casey Anne and Cailine Drummond.

April 11, 2015, 4 p.m.—Utsav Indian Festival.  The Indian Organization of Lancaster County (IOLC) is thrilled to bring back to Lancaster its second annual Utsav (Hindi for “festival”), which will showcase Indian culture through music, dance, fashion, “Bollywood” style performances and a banquet of Indian foods.

These events will take place at The Ware Center located at 42 N. Prince Street, Lancaster.  Tickets for any or all of the World Music and Festivals events may be reserved at ArtsMU.com, or by calling Ticket Office at Millersville University, 717-871-7600, or the Ware Center, 717-871-7018. Tickets may also be purchased at the Ticket Office, located in the Student Memorial Center on the Millersville University campus, or at front desk of the Ware Center, at 42 N. Prince Street, in Lancaster.

For more information, contact Laura Kendall at laura.kendall@millersville.edu or 717-871-7018.