To make the transportation of goods and people easier, early pioneers looked to Europe and quickly saw how canals effectively eliminated the “highs and lows” of the terrain and moved large bundles of goods from distant locations into urban areas and vice versa. Today, these canals are the focus of many historical events that beckon our participation.

The Conewago Canal, initiated in 1790, was the first in Pennsylvania.  It helped transport goods via riverboats around the Conewago Falls on the Susquehanna River near the present town of York Haven. Like many of the early canals in the state it was dug by a gang of workers wielding nothing more than shovels, picks and wheelbarrows.  The work was difficult, the living conditions were primitive at best and disease was often rampant. Pay was minimal and job security was nonexistent.  But new frontiers were conquered and new transportation routes were established. 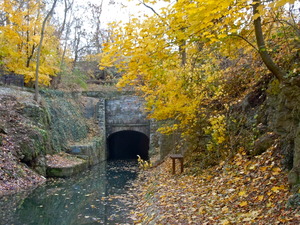 One of the most significant canals along the Susquehanna was the Union Canal Tunnel.  Completed in 1826, it was the second canal tunnel in the country, and today is maintained by the Lebanon County Historical Society as the “oldest tunnel in the United States.”

The Union Canal was the first canal route ever surveyed in the United States and was designed to connect the Schuylkill River at Reading with the Susquehanna River at Middletown (near Harrisburg).  The route for the canal was initially conceived by William Penn in 1690.  It wasn’t until 1792 that work on the canal was initiated, however.  Raising sufficient funds was a constant challenge for the companies digging the canal and slowdown after slowdown plagued the effort.  Eventually the state of Pennsylvania stepped in with some financial assistance and the canal was finally completed between 1821 and 1828—creating a water link between Philadelphia and the Susquehanna River.

The Union Canal was four feet deep and 36 feet wide. The tunnel was cut through solid rock using nothing more than hand picks, shovels and the most rudimentary blasting techniques.  It cut through a watershed ridge on the summit of the highest point between Reading and Middletown.  The barges were poled through the tunnel while the mules were walked over the ridge to join the boat at the other end.

It was an amazing feat of engineering for its time—in a distance of 81 miles it climbed 311 feet to the summit level of the canal at Lebanon and descended a total of 192 feet to the level of the Susquehanna River at the west end.  Along its length it employed a total of 93 lift locks. Unfortunately floods, water problems and the completion of the Lebanon Valley Railroad in 1857 eventually forced the Union Canal to close in 1885.

If you go - The Union Canal

Today the clip-clop of canal mules is but a distant memory, the calls of the lock-tender across the water but faint echoes and the passage of barges over (and through) long stretches of the Pennsylvania landscape are but brief paragraphs in history textbooks.  But the canals of Pennsylvania offer visitors and residents alike nostalgic journeys into distant times and long-ago memories.

After parking your car in the small lot above the tunnel, walk down the hill and note the remnants of the canal in front of you.  By turning 180 degrees to your left you will be able to see the canal as it slices through the hill.  Keep in mind that this tunnel is nearly 200 years old and would still be fully functional today if we were still using canals to transport our goods.  You can, however, take a narrated boat tour on the canal and through the tunnel for a nominal fee every Sunday afternoon throughout the summer months.

A family picnic at the little park beside the water would be perfect way to enjoy the gorgeous scenery that surrounds this iconic structure – one you’re not likely to see anywhere else in the country.

Depart Lancaster on PA-72N.  Drive north for about 25 miles to Lebanon (you will be going through the city of Lebanon).  When you get to Maple Street, PA-72 makes a sharp left turn.  Drive for 1.3 miles and when you arrive at the traffic signal make a slight left onto Tunnel Hill Road.  Drive for about .5 mile and there will be a small paved parking area on the left side of the road.  Pull into the parking area and walk down the hill.

Anthony D. Fredericks is a professor of education at York College and the author of Historical Trails of Eastern Pennsylvania.