The Ware Center of Millersville University in Lancaster will present the multimedia performance piece, “36 Dramatic Situations,” with artwork by local artist Gail Gray as part of Lancaster’s First Friday, Nov. 7. The show, which incorporates art, music, dance, poetry, comedy and puppetry, will be held at two times, 6 and 8 p.m. Tickets for the show are free, but are required, and can be reserved at ArtsMU.com, or by calling the box office, at 717-871-7600. Tickets may also be provided in person at the Ware Center, 42 N. Prince St., Lancaster.

The show, “36 Dramatic Situations,” is based on a treatise, written in 1921 by the French writer, Georges Polti, which suggests that all stories and dramas are varieties or adaptations of 36 basic plots. The show is being presented a second year in a row in the Ware Center’s Steinman Hall, following its initial success at the Center last year, and will feature 12 five-minute performance pieces—highlighted by a slide presentation of Gail Gray’s artwork—that interpret some of the “situations” as described by Polti.

An exhibition of Gray’s artwork will continue at the Ware Center through Dec. 16. 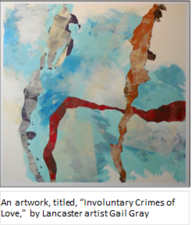 Gray is a fine artist who has lived and worked in Lancaster, Pa., since 1972. She earned a Bachelor of Fine Arts degree, with a dual major in painting and design, at Carnegie Mellon, where she continued her graduate studies under the direction of the master printmaker, Robert Gardener. Gray’s artworks in many media include painting, printmaking, fabric and fiber art, collage, assemblage and site-specific installations, and have been exhibited in juried and invitational arts events locally, regionally and nationally. Her art is displayed in numerous public spaces in Lancaster, including Saint James Episcopal Church, Marriott Hotel and Convention Center at Penn Square, the Lancaster Bar Association, Lancaster County Courthouse, Mid-Penn Legal Services, and in Lancaster Museum of Art’s permanent collection.  Her latest works reflect her participation in the Evolution Roundtable hosted by Franklin and Marshall College, concentrating on abstract images representing the successive steps of genetic inheritance.

In addition to Gail Gray’s artwork, artist Richard Huck will also be exhibiting his artwork at the Ware Center.  Richard will be present between 6 pm - 8 pm at the Ware Center on First Friday for an Artist Meet and Greet.  Richard Huck’s fine art embraces the realm of Surrealism and yet, maintains a positive foundation in the real world, what he likes to call ‘PhotoSurrealism’.  This exhibit shows works in graphite, colored pencil, and mixed media.  The subject matter shows Huck’s strong interest in machines, nature, and the underwater world.  He alters and extends the scenes to bring the viewer face to face with the unexpected.  A number of these works have not been seen since they were created.

Also during November’s First Friday, Viktor Yeliohin International Ballet Academy will preview “Nutcracker” in the lobby at the Ware Center with estimated preview times of 6:30, 7 and 7:30 p.m. Previews are approximately 5 minutes in length each.