Lancaster is known for its local foods and crafts, and in recent years, those traditional products have begun to be offered in a new way: online.

It was named the “digital capital” of Pennsylvania and recipient of Google’s eCity designation.

For the second year, the Internet search giant has recognized a community in each of the 50 states. Last year, Exton, in neighboring Chester County received the award.

While unfamiliar with the eCity program, Lancaster Chamber of Commerce & Industry President Tom Baldrige, said he was not surprised by the recognition.

“As traditional and conservative as Lancaster is viewed, it has always been a place where businesses are progressive,” said Baldrige.

Businesses are always looking for ways to expand their reach, he said.

To pick its eCities, Google collaborated with the research firm Ipsos to analyze the online strength of local small businesses based on zip codes.

While the award plaque is being presented to Lancaster city government, the zip codes represented radiate from the city into the surrounding suburbs.

Ipsos weighed a variety of factors, including the likelihood of small businesses to have a website, use a blog, promote themselves on a social network, sell goods directly from their webpages and whether they had a mobile-friendly website.

The winning cities exhibited strong engagement and potential for growth within the digital economy, said Google.

The award also came as no surprise to Lancaster Mayor Rick Gray, who received a plaque from Google last Thursday.

“We have more internet-related businesses than most would imagine in the city,” Gray said of  web marketing  and design firms located here.

In its materials, Google also noted the city government’s web presence. Cultural events, public safety alerts and meeting agendas are available on the city website. Issues are discussed on the city’s blog.

Particularly younger city residents,  Gray and Baldrige noted, rely on the internet for information. They shop online too.  The city’s web presence and that of local businesses is answering that demand.

“It’s not the future anymore, it’s the present,” said Gray. 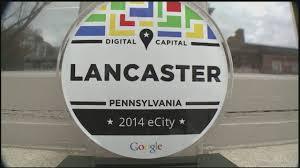