Just under 400 lots came up for bid, with the East portion consisting of Asian (mostly Chinese) art and antiques, including an especially large selection of porcelains, as well as furniture, scrolls, bronzes and even some stamps and currency. Balancing these were Western lots, comprised of antique furniture, clocks, vintage fine and decorative arts, Civil War memorabilia and autographs. Overall, the auction was a success.

“We’ve had tremendous good luck conducting auctions that combine the Eastern and Western culture interests,” said Gordon Converse of Gordon S. Converse & Company. “We feel we’ve established a good market for buyers of Asian antiques, and we routinely attract bidders willing to pay strong prices for better items. It was certainly true in this sale, with all Asian categories doing well. Even watercolor art, artifacts and Chinese currency, which can be spotty, did well.”

The auction saw strong advance bidder participation, with around 1,500 people signing up to bid through LiveAuctioneers.com and Invaluable.com. Mr. Converse described the in-house crowd as “predictably sparse,” but the over 1,500 online bidders more than made up for the light in-person turnout. Phone and absentee bids were also taken. “We were kept very busy throughout the day,” he said.

Following are additional highlights from the auction. All prices quoted include a 20 percent buyer’s premium. 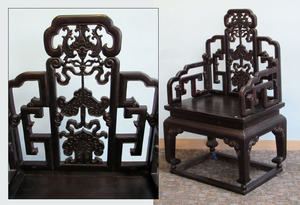 A set of ten Royal Copenhagen Flora Danica reticulated plates, each 8 ¾ inches in diameter and all numbered en verso, with Latin botanical titles in curved script, garnered $6,600; while a Louis Comfort Tiffany (N.Y.) gold baluster form vase, 9 inches tall with iridescent gold and pink sheen behind green vines, brought $3,900. The vase bore the bottom etched-on signature of  “L. C. Tiffany” and was dated to between 1915 and 1918.

A pair of 23-inch Qing (possibly Qianlong) fine famille rose lidded porcelain jars with figure and landscape motifs, each one standing 23 inches tall, were sold as one lot for $4,200; and a Ming dynasty lidded jar featuring reserves with three-color dragons, phoenixes, chimeras and more, 20 inches tall, went to a determined bidder for $26,400.

A Chinese silver tea service featuring a handled tray, teapot, sugar and creamer, with bamboo edging and handles applied on dragons, hallmarked ‘Wosing Lung’ and ‘Shanghai’ and weighing 70-80 troy silver ounces total, brought $5,100; while a Chinese rosewood zitan table screen with one side showing a lacquer landscape and the other carved hardstone relief figures, made $4,800.

Gordon S. Converse & Company’s next big auction will be their “Black Friday” event (the day after Thanksgiving), slated for Friday, Nov. 28, also at the Malvern gallery. Featured will be jewelry, artwork and fine art prints, silver, some toys, commemorative plates, Christmas decorations and other items. “Many items in this sale would make for ideal holiday presents,” Mr. Converse said.

Gordon S. Converse & Company is always accepting quality consignments for future sales. To consign a single item, an estate or a collection, you may call them directly, at (610) 722-9004; or, you can send an e-mail to Todd Converse, at Todd@ConverseClocks.com, or Gordon Converse, at Gordon@ConverseClocks.com. E-mailed inquiries receive serious and prompt attention.

Gordon S. Converse & Company now features “Free Appraisal Tuesdays.” Bring your item or items into the gallery in Malvern between 10:30 a.m. and 4 p.m. on Tuesdays and Gordon Converse (an appraiser on the hit PBS series Antiques Roadshow) will be there to give his expert opinion. Bring in the item or items, or a good set of photos.