Nash Bhatt, an award-winning filmmaker and resident of York County, will be on hand at the Ware Center of Millersville University located at 42 N. Prince St., Lancaster on Sunday, Nov. 2, for the screening of two of his films.

Marking its world premiere, his 30-minute, short film, “A Considerate Husband,” will be screened at 1 p.m., followed by a showing of his multiple award-winning, full-length film, “The Rise and Fall of Their American Dream.” (Both films contain explicit language, adult themes and violence, and are not appropriate for viewers under 17.) Between the screenings, Bhatt and members of the cast and crew of “A Considerate Husband”—which was shot in the Lancaster and York areas—will participate in a question and answer session.

Complimentary refreshments will be available.

A suspense thriller, the story of “A Considerate Husband” revolves around three police officers who get a tip from a man to search the home of his neighbor, whose wife has been missing for two weeks—amid racial tensions between the neighbors.

“The Rise and Fall of Their American Dream” tells the story of three men who form an unlikely friendship: Carlos is an illegal immigrant from Mexico, who finds poorly paid work as a mechanic; Vijay was lured to the U.S. from India by a conniving Indian motel owner who enslaves him; and Mike, who is indebted to his mob boss uncle and befriends the two immigrants. Their meeting will forever alter the course of many desperate lives. 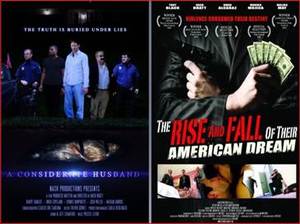 The themes of the films deal with racial and ethnic tensions, but the ultimate aim of his films, says Bhatt, is to challenge viewers to see his characters as “active participants in the ever evolving face of America.”  By presenting themes of social tensions within compelling storytelling rather than in a documentary format, Bhatt says he aims to entertain filmgoers while showing how “true friendship can break barriers of language, culture, ethnicity and religions, and could create harmony of friendship and love.”

These are messages close to Bhatt, head of Nash Bhatt Productions, LLC. He is himself an immigrant, having moved with his family from his native Gujurat, India, to York County in 1990, where he first began working behind the camera as a volunteer at the White Rose Community Television cable station. Bhatt later continued to work for the TV studio, for which he produced and directed several shows.

In 2004, Bhatt wrote and directed his first film, “Instant Aggression,” a short film that explored issues of domestic violence. The film was selected for two film festivals and broadcast on his former cable station. A year later, after studying scriptwriting at the New York Film Academy, Bhatt wrote a feature-length film, “The Rise and Fall of Their American Dream,” under the guidance of Academy Award-nominated and Tony Award-winning writer Mark Medoff (“Children of a Lesser God,” “City of Joy”). The film garnered numerous honors in 2010, including winning the Audience Choice Award at the Prometheus Film Festival in York, Pa., and the Bronze Palm Award at the Mexico International Film Festival, and selection for inclusion in the Nevada Film Festival and the prestigious Hoboken International Film Festival in New Jersey.

Tickets for the film screenings, $7 general admission and $5 for seniors and students, can be purchased at the front desk of the Ware Center, at 42 N. Prince Street, Lancaster or by visiting ArtsMU.com.