From a young age, Heidi Witmer saw firsthand how much creativity, resilience and gumption went into farming in rural Perry County, cultivating a healthy understanding of the process, pride and patience inherent in taking food from seed to stomach.

“You know that you matter, and the work you do matters, and the way you do your work matters,” Witmer says of the stoic farmers of her youth. It is an attitude sorely lacking in today’s Internet-obsessed teens. 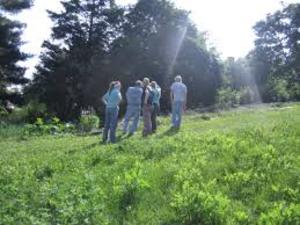 Fresh off its second year, Heidi Witmer’s Leadership, Education and Farming Project (LEAF) is more than just a primer in sowing seeds and reaping the succulent rewards. As Witmer found in similar programs like Boston’s Food Project, and her own work with emotional support students at Yellow Breeches Educational Center, employing teens by teaching them essential skills combats staggering youth unemployment rates and helps bring about social change, molding capable young adults using mentoring and leadership skills, and using food as a lens to explore questions of diversity, equity and inclusion.

“If they never grow another bean they will, hopefully, have developed understandings and skills that will help make them contributive, self-sufficient adults,” says host-farmer Bert Myers.

“The first year, I didn’t know anything about agriculture,” admits Ada Bailor, a 16-year-old Cumberland County resident who returned this year as a peer leader. “I had no clue how educated farmers actually are. I thought it wasn’t a job that required a lot of knowledge. You put something in the ground and it grows.” She quickly learned there was a lot more to it than that. 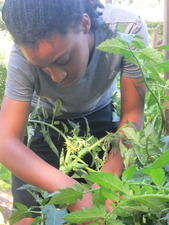 The work begins in early April and ends in November, with summer interns typically helping out during the busiest seven-week stretch. “There’s a sense of craftsmanship and excellence,” Witmer says, which is often absent in the burger-flipping jobs available to teens with no work experience. On the farm, the meaningful work gives way to brain and character development, building a sense of trustworthiness, integrity and dependability.

Workers ranging in age from 14 to 18 are tasked with managing five garden plots spread over four acres at the historic Myers’ homestead in Centerville, outside Carlisle, hand-raising 30 specialty crops under the mentorship of a few local chefs who rely on artisanal peppers and other distinct ingredients, like delicate squash blossoms, to make their signature cuisine.

“You have to get them perfectly, just in the morning that they open,” Witmer, 34, gushes over the squash flowers. “There’s such artistry and urgency about that moment. It’s so exciting!” 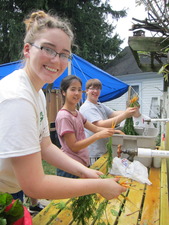 In addition to selling their crops to restaurant kitchens, LEAF interns get a crash course in food preparation spearheaded by mentor Shane Kaplan, the program’s culinary coordinator who also moonlights as a beekeeper and provides hands-on training in honey harvesting. Students are encouraged to cook for their families using their newfound knowledge.

“At first it’s just an assignment,” Witmer says, but the flops and failures spawn some aspiring chefs whose talents otherwise would be left untapped. “A lot of parents don’t think their kids are capable of cooking. A lot of times they haven’t had an opportunity.”

“My favorite ‘ah-ha’ moment was to see the kids harvest a selection of produce, me give a quick demo on how to prepare it, then to have them eat it—all within an hour from when it was in the ground,” said Ross Morris, executive chef and owner of Trattoria Piatto, in Carlisle. The experience has renewed his faith in the next generation.

Only 50 percent of the crops LEAF grows are sold for profit; the rest are funneled to hunger relief groups and donated to a homeless center and the Salvation Army, where LEAF interns also volunteer their time to teach cooking classes, passing on some of what they’ve learned. LEAF coordinators Kelsey Williams and Maggie Stonecash search out those opportunities and hammer home a broader understanding of the importance of the work. One in seven people in Cumberland County is food-insecure, meaning they don’t know where their next meal is coming from, Witmer says. 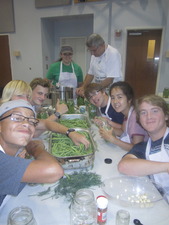 The field work takes only three days per week, but a rotating cast of specialty partner-farms fill up the rest of the teens’ work hours, bartering labor in exchange for learning old-world methods. At North Mountain Pastures in Newport, students are immersed in the lost art of old Italian salami production, packing meats into wine-soaked intestines. At Keswick Creamery in Newburg, teens milk 40 head of cattle, using the fresh ingredient as a basis for artisanal cheeses. Everything from the milking to the delicate work of stirring curds and stretching mozzarella is done by hand.

At Three Springs Fruit Farm in Aspers, the perception of unskilled laboring in agriculture is put to the test as students meet expert pickers at the 8th-generation operation and are schooled in the artistry of precise picking that marries speed and a gentle touch. Pickers must ensure no time is wasted while simultaneously taking care not to mar the delicate peaches and apples with blemishes and bruises.

After the first year, parents of Witmer’s 12 young workers were already noticing a change in their children and themselves. Elementary school-age kids tend to clam up at the dinner table, when the question “How was your day?” is answered by a grunt or, if you’re lucky, a single word.

“For the first time their children can’t help but answer that question,” exclaimed Witmer. “They come home tired and dirty and impressed by their capacity, and they really belong at the table talking about their day.”

But long after the end of the LEAF season, other changes emerged. Participants were changing what they ate, cutting out processed foods, and in many cases their parents were joining them, opting to alter how they spent the family food budget and reaching for healthier choices. It’s a testament to the long-lasting effects of LEAF’s teachings and “the power of people sitting down and eating together.” 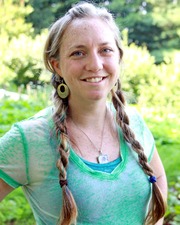 Witmer hopes other groups will use the LEAF model to create additional educational opportunities for young workers, and she’s slated to speak about her experience at the Empowering Our Region Through Mentoring and Leadership Conference, a joint endeavor of the Lewisburg-based Women’s Professional Partnership and Bucknell University taking place at the Campus Theatre in Lewisburg in October (EmpoweringOurRegion.com).

“You could use the same model with anything that requires some essential craftsmanship,” Witmer says. “The most important part of the process isn’t the task itself, but rather Witmer’s steadfast belief that today’s youths don’t need to be fixed or changed, just given an opportunity to thrive.